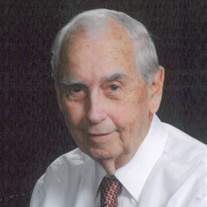 Normal - Earl B. Lipp, 92 of
Normal, passed away at 3: 49a.m. (Saturday) March 2, 2013 at his
home. His funeral will be at 1:00p.m. on (Wednesday) March 6, 2013
at Kibler-Brady-Ruestman Memorial Home in Bloomington with
Rev. Vaughn Hoffman officiating. Visitation will be from 11:00a.m.
until the time of the service on Wednesday at the funeral home.
Burial will be in Hopewell Cemetery Downs, IL. Memorials may be
made to Wesley United Methodist Church Bloomington or to the donors
choice.

Earl was born March 5th, 1920 in
Downs, IL, the son of Eugene F. and Era Bradshaw Lipp. He married
Margaret Wilson on June 20, 1948 at the Downs Methodist Church, she
survives .

He was preceded in death by his
parents and one grandson and one infant brother.


Earl was a self-employed watch maker for over 50 years. He was a
volunteer at Gailey Eye Clinic in Bloomington and at Advocate
Bro-Menn Hospital in Normal, as well as the former Mennonite
Hospital, Bloomington. He was a member of Wesley United Methodist
Church in Bloomington. He was a member of the Central Illinois
Watchmakers Association and was a member of the Koda-Roamers and
Photo Colorists Camera Clubs. He enjoyed fishing, golfing and his
morning coffee group. He enjoyed spending time with family and
friends and being with people. He will be greatly missed. Online
condolences may be sent to his family at www.kibler-brady-ruestman.com

To send flowers to the family or plant a tree in memory of Earl B. Lipp, please visit our floral store.

To send flowers to the family in memory of Earl Lipp, please visit our flower store.