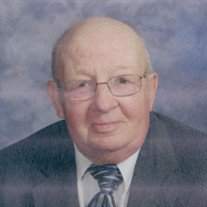 He was a member of Calvary Evangelical Mennonite Church in
Washington.

Funeral services will be held at 10:00 a.m. on Saturday,
September 15, 2012 at Argo-Ruestman-Harris Funeral Home in Eureka.
Rev. David Dillon will officiate. Vistiation will be held one hour
prior to services on Saturday at the funeral home. Burial will be
in Olio Township Cemetery in Eureka.

Memorial contributions may be made to St. Jude Children's
Hospital in Peoria, IL. Online condolences may be sent to the
family at www.ruestmanharrisfuneralhome.com.

To send flowers to the family or plant a tree in memory of Howard D. Springer, please visit our floral store.

To send flowers to the family in memory of Howard Springer, please visit our flower store.