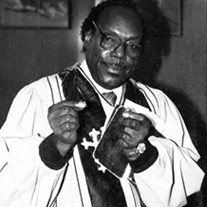 Interment will be in Evergreen
Memorial Cemetery in Bloomington. In lieu of flowers, memorial
contributions
may be directed to Mt. Pisgah Baptist Church. The family of Rev.
Sims has entrusted the care of their loved one to
Kibler-Brady-Ruestman Memorial Home in Bloomington.

In addition to his wife Corine,
Rev. Sims was preceded in death by his parents, two sons, James
Edward Sims, Jr., and   Donald "Tony" Terhune, a
grandson, Anthony DeLance Malone, and one brother, Robert Sims,
and
one sister, Aretha Bell.

In his youth Rev. Sims was a member
of Union Missionary Baptist Church, he later became the long
standing Pastor of Second Baptist Church in Streator where he
served for over 30 years. Rev. Sims has been at Mt. Pisgah Baptist
Church in Bloomington for the last 13 years.  He was also the
founder of Grace Baptist Church in Peoria.

Rev. Sims served in many facets of
the community. He was a member of the McLean County Community
Action, the NAACP, the Jail Review Board, Fire Commission,
Citizens Review Board, and also served as an election Judge in
McLean County. He was a member of the Bloomington American Legion,
and the Shriner's in Peoria. Rev. Sims was the executive director
of the United Community Gospel Singers of Bloomington-Normal Mass
Choir - which his late wife also founded. Rev. Sims also was
involved in many other community organizations. He served on the
Catholic Social Services Board since 1982

He was the proud recipient of the
Dr. Martin Luther King Human Relations Award of Bloomington. He was
a very giving human being and always was helping people. He
distributed food in his building to those who needed it. Rev. Sims
was a key organizer in the Food Share Program in Bloomington.

He enjoyed fishing, hunting, and
barbecuing; truly enjoyed speaking the word of Jesus and loved
reading the Bible, singing and listening to gospel music. Rev. Sims
enjoyed his time spent with his family and friends and he will be
deeply missed by all who knew him.

Online condolences may be sent to
the family at www.kiblerbradyruestman.

To send flowers to the family or plant a tree in memory of James E. Sims, Sr., please visit our floral store.

To send flowers to the family in memory of James E. Sims, Sr., please visit our flower store.