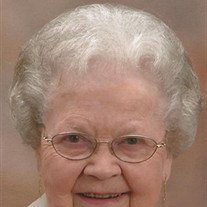 Also surviving are one son, David A. (Nanci) Carrithers of
Williamsburg, VA; one daughter, Judith A. (Eugene) Schlueter of
Bloomington, IL; one brother, Frank Jones of Albany, GA; four
grandchildren, and five great-grandchildren.

She was a lifetime member of the El Paso American Legion
Auxiliary.

Funeral services will be held at 11:00 am on Friday, January 18,
2013 at the Ruestman-Harris Funeral Home in El Paso. Rev. Stanley
Grant will officiate. Visitation will be held on Thursday evening
from 4-7 pm at the funeral home and one hour prior to the service
on Friday. Burial will be in Evergreen Cemetery in El Paso.

Memorial contributions may be made to a charity of the donor's
choice. Online condolences may be sent to the family at
ruestmanharrisfuneralhome.com.

To send flowers to the family or plant a tree in memory of Mary Helen Carrithers, please visit our floral store.

To send flowers to the family in memory of Mary Carrithers, please visit our flower store.