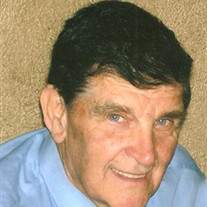 Merlyn owned and operated Roanoke Fire Equipment until his
retirement in 2011. He served on the Roanoke Fire and Rescue Squad
for 46 years and was currently serving as Vice President of the
Roanoke Fire Protection District Board.

Merlyn was known for his passion and willingness to help others
and serve the Lord. He loved horses, enjoyed antiques, gardening,
and spending time with his family.

He was a member of the Roanoke Apostolic Christian Church where
funeral services will be held at 10 am on Monday, December 10,
2012. Church ministers will officiate. Visitation will be from 1-4
pm on Sunday at the Knapp-Johnson-Harris Funeral Home in Roanoke
and from 9:00-9:45am on Monday at the church. Burial will be in the
church cemetery.

Memorial contributions may be made to the Roanoke Fire
Department or Roanoke Ambulance. Online condolences may be sent to
the family at knappjohnsonharris.com.

To send flowers to the family or plant a tree in memory of Merlyn Getz, please visit our floral store.

To send flowers to the family in memory of Merlyn Getz, please visit our flower store.