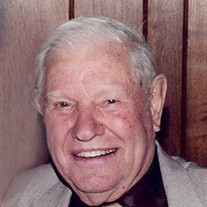 
He was preceded in death by his parents, one daughter, Sandra
Breach and one brother, Raymond Schoon.


Myron was a lifetime farmer in the Roanoke area.  He worked
for McBride and Schoff in Metamora during the winter months.
He was a member of the Woodford County Farm Bureau.


Myron was a member of the St. Peter Lutheran Church in rural
Benson where funeral services will be held at 11:00 am on Saturday,
May 18, 2013.  Rev. William Hecht will officiate.
Visitation will be held on Friday evening from 4-7 pm at the
Knapp-Johnson-Harris Funeral Home in Roanoke and one hour before
services on Saturday at the church.  Burial will be in the St.
Peter Lutheran Church Cemetery.


The family wishes to thank the Roanoke Apostolic Christian Home
for all their kindness and generosity shown to Myron.


Memorial contributions may be made to the St. Peter Lutheran
Church or the Roanoke Apostolic Christian Home.  Online
condolences may be sent to the family at
ruestmanharrisfuneralhome.com.

To send flowers to the family or plant a tree in memory of Myron Schoon, please visit our floral store.

To send flowers to the family in memory of Myron Schoon, please visit our flower store.