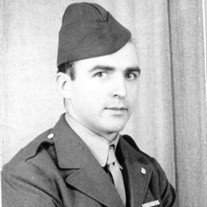 Lacon- Albert E. Guede, 96, of Lacon died at OSF St Francis
Medical Center on Monday, July 22, at 8:20 am. Born July 27, 1917
in Vetal, SD to Emiel and Florence Jenkins Guede, he graduated from
Lacon High in 1935 then joined the National Guard serving into
WWII. He worked at Caterpillar starting as an apprentice in 1943
and ending his career in 1982 as a tool designer.


Also surviving are sons Charles (Reggie) of Chillicothe; Emiel
(Cindy) of Chillicothe; Art (Claire) of Metamora; daughters Geri
(the late Paul) Lea of Virginia;  and Ginger (Daniel) Rentfro
of East Peoria. Albert had nineteen grandchildren and 27 great
grand children. He was preceded in death by 2 sons,  James
Guede and Don Edwards, and one brother Edwin.


Services will be held at Lenz Memorial Home in Lacon on Thursday
at 2:00 pm with visitation one hour prior to the service. Rev. Mike
Barclay will officiate. Memorials can be made to the Lacon American
Legion. Entombment will be in the Lacon Mausoleum. Online
condolences can be left at lenzmemorialhome.com

To send flowers to the family or plant a tree in memory of Albert E. Guede, please visit our floral store.

To send flowers to the family in memory of Albert Guede, please visit our flower store.