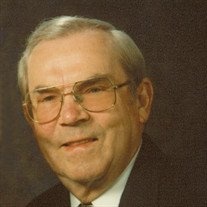 He was preceded in death by his parents, one son, Bob Hinrichs; two brothers, Eugene and Noble Hinrichs; and one sister, Eileen Timmerman.

An Army veteran, Albert served his country during the Korean War. He was a member of the Benson American Legion Post #454.

He graduated from the University of Illinois in 1950 with a degree in Agriculture and was a lifelong farmer in the Benson area. He had also served as the president of the Farmers State Bank in Benson.

Albert was a member of the St. Peter Lutheran Church where memorial services will be held at 11:00 am on Monday, January 18, 2016. Pastor Gabriel Baumgardner will officiate. Visitation will be held from 9-11 am before the service at the church. Per his wishes, cremation rites will be accorded and burial of cremains will be in the St. Peter Lutheran Cemetery at a later date. Knapp-Johnson-Harris Funeral Home in Roanoke is handling the arrangements.

Memorials may be directed to St. Peter Lutheran Church or the Benson American Legion Post #454. Online condolences may be sent to the family at www.knappjohnsonharris.com.


To send flowers to the family or plant a tree in memory of Albert Hinrichs Jr., please visit our floral store.

To send flowers to the family in memory of Albert Hinrichs Jr., please visit our flower store.