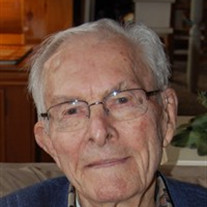 Funeral services will be at 11 a.m.
Saturday, December 29, 2012 at Kibler-Brady-Ruestman Memorial Home
in Bloomington with Rev. Chad Lueck officiating. Visitation will be
one hour prior to the services at the memorial home on Saturday.
Entombment will be at Park Hill Mausoleum in Bloomington. Memorial
contributions may be made to Honor Flight of Central Illinois.

He was preceded in death by his
parents and one sister, Alta Laesch.

He served in the Army during
WWII.

Alfred farmed in his earlier years
and was later a contractor and retired from Country Financial in
1982.

Alfred was a member of the Good
Shepherd Lutheran Church in Bloomington and McLean County Sr. Golf
Association.

He was a die hard Cub fan and train
enthusiast.

To send flowers to the family or plant a tree in memory of Alfred P. Lockenvitz, please visit our floral store.

To send flowers to the family in memory of Alfred Lockenvitz, please visit our flower store.