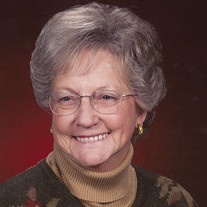 She was preceded in death by her parents, one son Joey Janssen, one brother Herman Budde, and one sister, Bertha Decker.

Of the many things she enjoyed in life, her favorites were gardening and spending time with her family and grandchildren. She will be remembered as a loving mother, grandmother, and great grandmother.

She was a member of St. Paul's Lutheran Evangelical Church in Benson where funeral services will be held at 10:00 am on Wednesday July 26th. Visitation will be held at Knapp-Johnson-Harris Funeral Home in Roanoke from 4-7 pm on Tuesday and from 9-9:45 am on Wednesday at the church. Burial will be in Clayton Township Cemetery, Benson, IL.

Memorial contributions may be made to St. Paul's Lutheran Church or to the Apostolic Christian Home of Roanoke.

To send flowers to the family or plant a tree in memory of Amelia G Janssen, please visit our floral store.

To send flowers to the family in memory of Amelia Janssen, please visit our flower store.