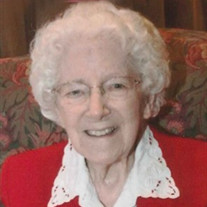 
She was preceded in death by her parents, four
brothers and three sisters.


Ann was an active volunteer all her life.  She
volunteered at the Metamora grade school and high school,  Et
Cetera Shop in Eureka, Eureka Hospital and at the Eureka Apostolic
Christian Home; and was a Girl Scout leader.


Ann repented at the age of 15 and faithfully served
her Lord for 81 years. She was active and taught Sunday School and
Vacation Bible School.


Ann was a member of Eureka Apostolic Christian
Church where funeral services will be held on Thursday, August 1,
2013 at 10:00a.m. Church ministers will officiate. Visitation will
be held on Wednesday, July 31, 2013 from 4-7p.m. at
Argo-Ruestman-Harris Funeral Home in Eureka and also from
9-9:45a.m. on Thursday before the funeral at the church. Burial
will be in the Roanoke Apostolic Christian Cemetery.


Memorial contributions may be made to the Apostolic
Christian Home of Eureka or Heart House. Online condolences may be
sent to the family at www.ruestmanharrisfuneralhome.com.

To send flowers to the family or plant a tree in memory of Ann Leman, please visit our floral store.

To send flowers to the family in memory of Ann Leman, please visit our flower store.