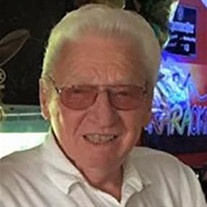 He was preceded in death by his parents, five brothers, Ernest, Albert, Frank, Chester, and Eldon; and two sisters, Vida and Helen.

Art was a lifelong Benson resident and pillar of his community where he and his wife Donna owned and operated AJ's Lounge in Benson.

He was a member of the St. Paul Lutheran Church in Benson.

AJ had a lifelong passion for music and loved to play for people and especially loved to play with his family. What he was most known for though was his love of people. He was the type of who could talk to anybody regardless of their age or situation in life. He never met a stranger and will be greatly missed by those who loved and knew him.

Per his wishes, cremation rites will be accorded. The family will be hosting a celebration of Art's life by greeting friends and family on Sunday from 2-5 pm at the Benson American Legion.


To send flowers to the family or plant a tree in memory of Art "AJ" Gerdes, please visit our floral store.

To send flowers to the family in memory of Art Gerdes, please visit our flower store.