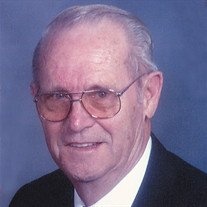 He was preceded in death by his parents, one granddaughter, three brothers; and six sisters.

An Army National Guard Veteran, Art proudly served his country as a tank mechanic over seas in Korea during the Korean War. He was a member of the Roanoke American Legion Post #463.

Art owned and operated the Roanoke Milling Company for 46 years before retiring in 2012.

Art also served his community as Palestine Township Supervisor and was a volunteer fire fighter for 40 years serving on the Secor and El Paso Fire Departments.

Funeral services will be held at 10 a.m. on Tuesday March 5, 2019 at the Knapp-Johnson-Harris Funeral Home in Roanoke, IL. Pastor Bob Herath will officiate. Visitation will be held from 5-7 pm on Monday evening also at the funeral home. Burial will be at Secor Cemetery.

Memorial contributions may be made to the Apostolic Christian Home of Roanoke. Online condolences may be sent to the family at www.knappjohnsonharris.com.


To send flowers to the family or plant a tree in memory of Art Wilkey, please visit our floral store.

Please click here to view the video tribute
To send flowers to the family in memory of Art Wilkey, please visit our flower store.