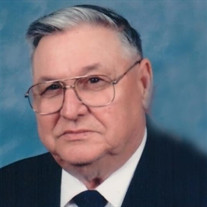 He was preceded in death by his parents, one son, Dale Bill, five sisters and two brothers.

Benjamin was a farmer and worked for Ulrich's in Roanoke, then went to work at Caterpillar where he retired from.

He served in the United States Army during the Korean War in 1951 and was awarded the purple heart.

Benjamin was a member of Trinity Lutheran Church in Roanoke.

Funeral services will be held at 11:00a.m. on Tuesday, November 3, 2015 at the Knapp-Johnson-Harris Funeral Home in Roanoke. Reverend Bruce Scarbeary will officiate. Visitation will be held one hour prior to services at the funeral home on Tuesday. Burial will be in Roanoke Township Cemetery where military rites will be accorded at the grave. Knapp-Johnson-Harris Funeral Home in Roanoke is handling arrangements for his family.

Memorial contributions may be made to University of Texas @Tyler for development of Autism Research. Online condolences may be sent to the family at knappjohnsonharris.com


To send flowers to the family or plant a tree in memory of Benjamin Bill, please visit our floral store.

To send flowers to the family in memory of Benjamin Bill, please visit our flower store.