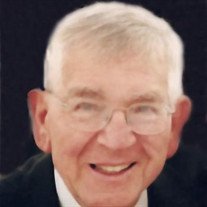 A recent resident in Germantown Hills, Ben was a life-long resident of Three Oaks, Michigan where he was a businessman and active member of the community. Ben was well known and regarded in Three Oaks, and was proud to be a native son to the village. The house in which he resided his last forty years was only a few doors away from where he grew up.

Ben attended Three Oaks High School where he played for the "Oaker's" Baseball and Basketball teams. Ben then attended Kalamazoo College, and after graduation joined the Army just as most of his cousins had done. After boot camp at Fort Hood, Texas, Ben was sent to the European theatre during WWII. Ben worked in a field hospital with the 83rd Field Hospital, serving in central Europe for 6 months.

After returning home to Three Oaks, Ben met Norma, and married her when she graduated from Michigan State University. Ben became the first commandant of the Randall Coachman American Legion, post 69. Ben was an instrumental member in developing the inaugural Three Oaks Flag Day Parade. Ben was active with the Free and Accepted Masons with his Father, Brother, Uncles and Cousins.

Ben was a lifelong member at Chikaming Country Club, Lakeside MI, where he had been a caddy for many summers as a young boy. Ben taught the game to his wife and children and they all played together until Ben and Norma were well in their 80's. Ben shot a hole-in-one.

Ben was an avid sports fan. When John and Charles were growing up, Ben and his brother Ted would take the boys to at least one Cubs game each season. They would have dinner at the Berghoff restaurant after the game just as his father did with him and Ted when they were growing up.

During the fifty years he ran his real estate and insurance business Ben ran the business with integrity and professionalism. He almost always wore a suit to work, and always had lunch at home, just one block from his office. In the afternoons, he would walk a block to his friend's drug store and enjoy a malted milk from the soda fountain.

After retirement, Ben and Norma enjoyed traveling throughout Europe (he was proficient in French and German) with their children and wintered in Sun City West, Arizona.
Ben was happiest when he was with family. He loved to joke around and talk, and his laugh was always hearty. Throughout his life he could quote the Canterbury Tales in old English. His legacy is a love of good humor and his good and kind nature.

Cremation rites will be accorded and a memorial and celebration of Ben's life will be held in Three Oaks at a later date. Online condolences and tributes to Ben may be sent to the family at www.knappjohnsonharris.com

In lieu of flowers, the family has requested memorials to be made in behalf of MS Society.

To send flowers to the family or plant a tree in memory of Benjamin L Drier, please visit our floral store.

To send flowers to the family in memory of Benjamin Drier, please visit our flower store.