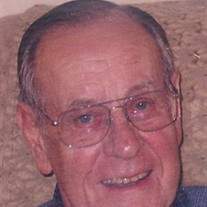 He was preceded in death by his parents, one sister and one
brother.


He was a lifelong farmer in the Eureka area. Bernie
went thru the Caterpillar apprentice program to get his engineering
degree. He worked at Wabco in Peoria as an engineer. He then
managed and operated Metamora Industries for 35 years retiring in
1986.  After retirement he drove the school bus for Eureka
School District #140.

Bernie was a member of the Eureka Presbyterian Church, Kiwanis
Club, Masonic Lodge #98 in Washington, IL and Eastern Star Chapter
115. He also was a 4-H leader and he ushered for the Bloomington
Center for  Performing Arts.


In lieu of flowers, memorials may be made to the Eureka
Presbyterian Church or Apostolic Christian Home of Eureka. Online
condolences may be sent to the family at
www.ruestmanharrisfuneralhome.com.

To send flowers to the family or plant a tree in memory of Bernon McClallen, please visit our floral store.

To send flowers to the family in memory of Bernon McClallen, please visit our flower store.