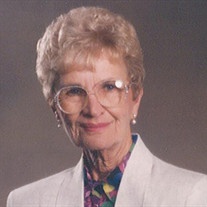 She was born on December 9, 1928 in Benson a daughter of Anthony and Elizabeth McDonell Brockling. She married Lyle P. Heineke on August 9, 1947 in Minonk. He passed away on June 4, 2014.

She was preceded in death by her parents, three sisters, and one grandson.

Betty and Lyle owned and operated Heineke Electric in Benson for many years. Betty was a member of St. John Catholic Church where she was active in the Altar and Rosary Society. She was a founding member of Tall Oaks County Club in Toluca and also the American Legion Auxiliary Post #454 in Benson.

Betty loved golfing and playing cards. She enjoyed wintering in Florida with Lyle for 30 years.
Lyle was the love of her life and her happiest times were those spent with him.

Per her wishes, private mass will be held at St. John Catholic Church in Benson. Burial will be in the church cemetery. Knapp-Johnson-Harris Funeral Home in Roanoke is handling the arrangements.

Memorials may be directed to St. John Catholic Church or to the Crohn's and Colitis Foundation of America. Online condolences may be sent to www.knappjohnsonharris.com.

To send flowers to the family or plant a tree in memory of Betty A. Heineke, please visit our floral store.

To send flowers to the family in memory of Betty Heineke, please visit our flower store.