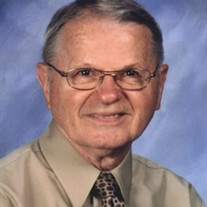 Eureka- John William "Bill" Chally, 82 formerly of Aurora,
Illinois, went to be with his Lord on February 15, 2013 at 3:10 pm
at Maple Lawn Health Center in Eureka.

He was born on December 19, 1930 in Aurora, Illinois the son of
Martin and Bernice Howen Chally.  He married Janette Durbin in
Aurora, IL on July 13, 1950, she survives.

He was preceded in death by his parents; one brother, Ted
Chally; and one sister, Joyce Worland.

Bill worked 31 years as a meat cutter and subsequently as a
manager for the Great Atlantic and Pacific (A&P) Tea Company in
the Chicago suburbs.  Bill and Janette raised their family in
Aurora, IL and later moved to Sandwich, IL where Bill worked for
Siemens International for five years and later managed the Medicine
Shoppe in Sandwich until his retirement.  In 2005 Bill and
Janette moved to Eureka, IL.

Bill was a member of the Liberty Bible Church in Eureka where
Bill and Janette served in the children's ministries.  He and
Janette loved to travel and he especially enjoyed spending time
with this grandchildren and great grandchildren.

Funeral services will be held at 10:00 am on Tuesday February 19
at the Liberty Bible Church in Eureka.  Tom Zobrist and
Michael Brown will officiate.  Visitation will be held from
4-7 pm on Monday at Argo-Ruestman-Harris Funeral in Eureka and from
9-10 am on Tuesday before the services at the church.  Burial
will be at West Lisbon  Cemetery where grave side
services will be conducted at 2:30 pm.

Memorial contributions may be made to Liberty Bible Church of
Eureka, or Camp ID-RA-HA-JE a children's camping ministry.
Online condolences may be sent to the family at
ruestmanharrisfuneralhome.com.

To send flowers to the family or plant a tree in memory of Bill Chally, please visit our floral store.

To send flowers to the family in memory of Bill Chally, please visit our flower store.