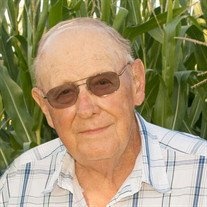 He was born on November 20, 1928 in Bloomington, IL to Carl John and Edith Bonge Haas. He married Doris Schirer on August 29, 1955 in Roanoke. She survives.

An Army veteran, Bob attained rank as sergeant while proudly serving his country during the Korean War. He was a member of the Roanoke American Legion Post # 463.

Bob was a life-long farmer in Woodford County. He enjoyed farming with several generations of his family. He served on the board of directors at the Roanoke Farmer's Association for many years.

Bob had a great interest in restoring antique tractors and farm equipment with a special interest in preserving the legacy of the Haas tractor. He was a founding member and coordinator of the Haas Tractor Club of North America.

He was a member and elder of the Eureka Church of Christ where he helped to establish and oversee the move of the church to its' current location now in Eureka.

Bob enjoyed spending the winters with his wife in Florida where he met many friends from all over the United States. "Papa Bob" loved his family and grandchildren most of all and cherished the times spent with them. His kindness and generosity will be greatly missed.

Memorial contributions may be made to Hands of Compassion Ministry, 840 W. Center Street, Rochester, MN 55902, Greater Peoria Honor Flight, P.O. Box 5072 Peoria, Il 61601-5072, or Eureka Church of Christ for Mision Para Cristo ministry in Nicaragua. Online condolences may be sent to the family at knappjohnsonharris.com.


To send flowers to the family or plant a tree in memory of Bob Haas, please visit our floral store.

Please click here to view the video tribute
To send flowers to the family in memory of Bob Haas, please visit our flower store.