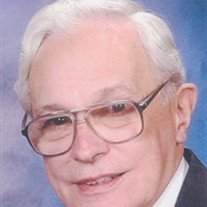 Bloomington - C.
Eugene "Gene" Asbury, 86, passed away Saturday, Nov. 17,
2012.  No memorial services are planned. A private interment
will be held at Funks Grove Cemetery in McLean.
Kibler-Brady-Ruestman Memorial Home  is assisting the family
with arrangements.

Gene was born April 25, 1926, in
Watseka, Ill., to Thurman and Bernice Asbury of Milford,
Illinois.

He completed elementary and high
school in Milford before enrolling in the Purdue University College
of Engineering in 1944. He then transferred to the University of
Illinois at Urbana-Champaign, where he graduated from the School of
Architecture in 1949. He joined the Bloomington architectural firm
of Lundeen and Hilfinger immediately after graduation in 1949.

Gene entered military service in
1952 during the Korean War, and was stationed in Missouri and
Washington before serving a year in Korea with the 7th
Army Division. During his military service he was involved with
designing and drafting for company, regiment and division
headquarters.

After his service in Korea, he
returned to Bloomington and the Lundeen and Hilfinger firm and
became a registered architect in 1953. He subsequently became a
partner of the firm, which grew to become Hilfinger, Asbury,
Cufaude and Abels.  The firm of Hilfinger, Asbury, Abels and
Associates merged with Shive Hattery in 1994.  Gene stayed
with that firm for three years, then became affiliated with Young
Architects.  He completed 63 years of architectural
practice.

Gene was well respected in the
field of architecture. He spent four years on a National Judicial
Facilities Committee, sponsored by the Ford Foundation, to develop
Court House and Court Room standards nationwide. He later helped
author Court Facility Standards specifically for Illinois as
requested by the Illinois State Supreme Court.

He was an avid and accomplished
photographer and a longtime member of the KodaRoamers camera club,
and served as president of the club for two years. He traveled to
many states and at least 11 countries in pursuit of this
hobby.  He and his wife were often accompanied by best friends
Mary and Herman Dirks, now residing in Phoenix, Arizona.

He is survived by his wife, Maurine
(Gaddis, whom he married in 1952, and three children, Valera Asbury
(Michael Monahan) of Bloomington, Daryl Asbury, of Door County,
Wisconsin and Pamela Asbury (Jeff Swan) of Denver, Colorado.
There are six grandchildren, Nina Asbury and Jay Asbury of North
Carolina, Virginia Asbury of Tennessee, Dylen Swan of Colorado, and
Kean Monahan and Kerri Monahan, Bloomington. One great grandson,
Hudson Asbury, resides in North Carolina.

He is also survived by a sister,
Marjorie (Robert) Park of Bloomington.  He was preceeded in
death by his parents and one sister, Caryl Bane, of Saybrook.

In lieu of flowers, memorials may
be made to the Community Cancer Center Foundation or the Unitarian
Universalist Church of Bloomington.

To send flowers to the family or plant a tree in memory of C. Eugene "Gene" Asbury, please visit our floral store.

To send flowers to the family in memory of C. Asbury, please visit our flower store.