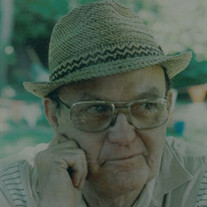 Normal, IL - C. Ralph McCown, 91, of Normal passed away,
surrounded by his family, at 4:28 p.m. on Tuesday, December 11,
2012, at Advocate BroMenn Regional Medical Center in Normal.
Funeral services will be held at 10:00 a.m. Saturday, December 15,
2012, at Kibler-Brady-Ruestman Memorial Home in Bloomington with
Rev. Dr. G. Mel Redding officiating. Visitation will be from 4-7
p.m. on Friday, December 14, 2012, at Kibler-Brady-Ruestman
Memorial Home in Bloomington and one hour prior to the services on
Saturday at the Memorial Home. Interment will be at East Lawn
Memorial Gardens. Memorial contributions may be made to Home Sweet
Home Mission and Police Benevolant & Protective Association
Unit 22.

He was preceded in death by his wife, Edith, and one sister,
Laverne Meiners.

McCown served on the Normal Police Department from 1944-1971 and
retired at the rank of sergeant. He was instrumental in the
creation of the Board of Police and Fire Commissioners in 1947. He
served briefly as the Acting Chief of Police in 1966, then as
executive aide to Chief Bill Bray. He was the first motorcycle
officer on the Normal Police Department. In 1968, he graduated from
the Traffic Institute of Northwestern University. Following his
service on the Normal Police Department, he served the McLean
County Sheriff's Department as a communications officer and
executive aide to Sheriff John King. As executive aide, he was
second in command of the Sheriff's Department. Later in life, he
also served for many years as a member of the Normal Police Pension
Board.He and his wife were active members of the former Evangelical
United Methodist Church in Bloomington. He was a life member of the
Kickapoo Muzzle Loaders Club, life member of the National Muzzle
Loading Rifle Association, and an avid motorcycle enthusiast.
Ralph was a spirited man who lived a full and independent life. He
will be deeply missed by his family and friends.

Online condolences can be made to the family at
kiblerbradyruestman.com

To send flowers to the family or plant a tree in memory of C Ralph McCown, please visit our floral store.

To send flowers to the family in memory of C McCown, please visit our flower store.