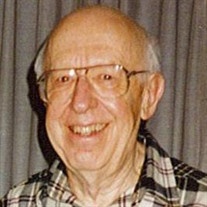 Roanoke - Calvin Moser, 90, of Roanoke, passed away at 11:50 pm on Thursday November 3, 2016 at the Apostolic Christian Home of Roanoke.
He was born on November 16, 1925 in Roanoke to Edward and Olga Greuter Moser. He married Jan Stoecker on May 2, 1999 in Roanoke. She survives.
Also surviving are two step sons, Todd (Darcy) Stoecker of New London, IA; Jason (Gayla) Stoecker of Chesterfield, MO; three brothers, Lyle Moser; Harley (Gerri) Moser; Glenn (Christa) Moser; one sister Barbara (Richard) Stoller all of Roanoke; 5 step grandchildren; and several nieces and nephews who played such an important role in his life.
He was preceded in death by his parents and his sister-in-law Barbara Moser.
An Army veteran, Calvin served his country overseas during WWII.
Calvin was a mechanical engineer, working in Roanoke his whole career starting for Ulrich manufacturing, then working for Besser's and finishing his career at Parson's before he retired.
Calvin enjoyed bird watching and flowers. He was known for the many gladiolus he grew every year and was a member of the gladiolus society. He loved to write poetry and had a book of many poems that he had written.
Calvin had also volunteered many hours of his time for meals on wheels, the Apostolic Christian Home and many other locations.
He was a member of the Roanoke Apostolic Christian Church where funeral services will be held at 10 am on Monday November 7th. Church ministers will officiate. Visitation will be held from 1-4 pm on Sunday at the Knapp-Johnson-Harris Funeral Home in Roanoke and from 9-9:45 am on Monday at the church prior to the service. Burial will be in the church cemetery.
The family would like to thank Peg Stoller at Methodist Hospice and the staff at the Apostolic Christian Home for all the care given to Calvin.
Memorial contributions may be made to Apostolic Christian Home of Roanoke. Online condolences can be sent to the family at knappjohnsonharris.com

To send flowers to the family or plant a tree in memory of Calvin Moser, please visit our floral store.

Please click here to view the video tribute
To send flowers to the family in memory of Calvin Moser, please visit our flower store.