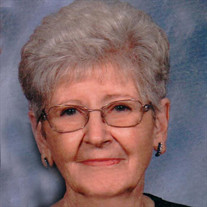 She was born on July 24, 1935 in Bloomington, IL to Dale and Ruth Jackson Woosley. She married Arthur Wilkey on November 11, 1951 at the Secor United Methodist Chruch. He survives.

She was preceded in death by her parents, one brother, and one granddaughter.

Carolyn was a bookkeeper with her husband for over 40 years in their business, Roanoke Milling.

Carolyn's faith was the cornerstone of her life. She held fast to and shared her faith even to the end proclaiming "God is in control." She loved spending time with her family and especially enjoyed her grandchildren and her time spent wintering in Florida with her husband. She was a former bowler and loved to crochet and needlepoint.

Memorial contributions may be made to Illinois Heartland Emmaus or the Apostolic Christian Home of Roanoke. Online Condolences may be sent to the family at knappjohnsonharris.com


To send flowers to the family or plant a tree in memory of Carolyn Wilkey, please visit our floral store.

To send flowers to the family in memory of Carolyn Wilkey, please visit our flower store.