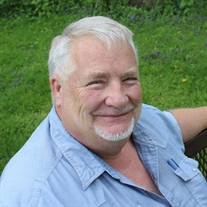 He was born on April 10, 1950 in Peoria, IL to Merle and Margaret (Reinholtz) Kiblinger. He was first married to Vicky Adams and later married Deborah Regenold on August 14, 1976 in Bloomington, IL. They both survive.

Chuck worked as a tool and dye maker. He started his career with an apprenticeship through General Electric. He later worked for Group Tool and Dye in Normal, IL.

Chuck will be remembered by many for his huge kind heart, willingness to lend a hand to anyone in need, and his uncanny ability to go to sleep with not knowing how to solve a certain task, however in the morning he would awake with the solution. Chuck was a self-taught musician his guitar was his weapon of choice and he loved to share his gift of music. Chuck was an avid supporter of the Boy Scouts of America and was known as a worship leader. He loved to spend time in his garage and loved the fact the everyone knew if the doors where open it meant there was an open invite.

Cremation rites have been accorded and a memorial service will be held on Tuesday October 3, 2017 at Knapp-Johnson-Harris Funeral Home in Roanoke. Visitation will be held for 2 hours prior from 9am to 11am. Reverend Phil Bachman will officiate. Private family burial will be held at a later date.

Memorials may be made to the Heart House of Eureka. Online condolences can be sent to the family at knappjohnsonharris.com


To send flowers to the family or plant a tree in memory of Charles "Chuck" Kiblinger, please visit our floral store.

Please click here to view the video tribute
To send flowers to the family in memory of Charles Kiblinger, please visit our flower store.