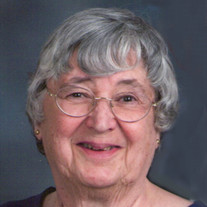 Zionsville, IN - Claire J. "Connie"
Scheller, 81, of Zionsville, IN, formerly of Bloomington, passed
away at 5:55 p.m. on Tuesday, April 15, 2014 at Zionsville Meadows
Nursing Home in Zionsville, IN.

Interment will be at Park Hill Cemetery in Bloomington. Memorials
may be made to The Alzheimer's Association.

Connie was born on June 2, 1932 in Bloomington, a daughter of
Florence E (Panneitz) and Emmet A Wade. She married Clarence H.
Scheller on October 1, 1961 at Trinity Lutheran Church in
Bloomington. He preceded her in death on August 27, 2010.

In addition to her husband, Clarence, she is preceded in death by
her parents, her brother Ronnie and two daughters.

Connie graduated from Bloomington High School. She worked at State
Farm. She was a member of Trinity Lutheran Church in Bloomington.
She enjoyed volunteer quilting at St. Joseph Hospital and
reading.

She truly adored being a grandma
and interacting with her grandchildren.

To send flowers to the family or plant a tree in memory of Claire J. "Connie" Scheller, please visit our floral store.

To send flowers to the family in memory of Claire Scheller, please visit our flower store.