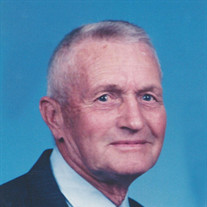 Benson - Clarence R. Campen, 92, of Benson, IL, passed away at 7:40 pm on Tuesday, November 21, 2017 at the Apostolic Christian Home of Roanoke.
He was born on October 19, 1925 in Benson, IL, to Ralph and Jennie Hinrichs Campen. He married Betty M. Alsene on December 10, 1949 in Benson, IL. She passed away on September 7, 2012.
Surviving are two sons, John (Terri) Campen of Chesterfield, MO; Jim (Marlene) Campen of Benson; three daughters, Carol (Martin) Kuipers of Bonfield, IL; Janet (Gary) Williamson of Eureka; Kimberly (Tim) Schrader of Machesney Park, IL; one brother, Eldon Campen of Bedford, IN; 13 grandchildren; and 15 great grandchildren.
He was preceded in by his parents, three infant children, Katherine, Jerome, and Timothy; one sister, Esther Campen; and three brothers, Lester, Carl, and John Campen.
Clarence farmed in the Benson area all of his life. He also operated Campen Transfer for many years and had worked as a machinist at DMI in Goodfield.
He served on the church council at St. Paul Lutheran Church and St. Peter Lutheran Church both in Benson. He also had served on the board of directors at the Roanoke Farmers Association and served on the Roanoke-Benson Unit Dist. # 60 school board.
He was a member of St. Paul Lutheran Church in Benson where funeral services will be held at 10:30 am on Saturday November 25, 2017. Pastor Daniel Tuhy will officiate. Visitation will be held from 9:30-10:30 am on Saturday at the church prior to services. Burial will be in St. Peter Lutheran Cemetery in rural Benson. Knapp-Johnson-Harris Funeral Home in Roanoke is handling arrangements for the family.
In lieu of flowers, memorial contributions may be made to the Benson Ambulance, St. Paul Lutheran Church, or the Apostolic Christian Home of Roanoke. Online condolences may be sent to the family at knappjohnsonharris.com

To send flowers to the family or plant a tree in memory of Clarence R. Campen, please visit our floral store.

To send flowers to the family in memory of Clarence Campen, please visit our flower store.