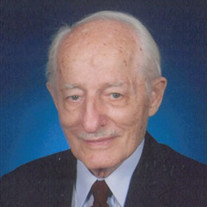 Cornelius John (CJ) Dyck, 92
years, Normal, Illinois, died January 10, 2014, surrounded by Wilma
Regier Dyck, his loving wife and family. His body has been donated
to the Illinois Anatomical Gift Association from where his ashes
will be returned to the family for burial at the Mennonite (Ropp)
Cemetery. Visitation is scheduled for Friday, January 17, from 5 to
8 pm with a memorial service on Saturday, January 18, at 10:30 am;
both events will be held at the Mennonite Church of Normal.
Kibler-Brady-Ruestman Memorial Home in Bloomington is assisting the
family with arrangements.

Dr. Dyck was born in Russia on
August 20, 1921, and immigrated to Canada with his family at the
age of five. Soon after completing high school he was drafted,
being assigned to alternative service on his father's farm because
of the latter's ill health, where he raised a lot of "Bacon for
Britain" during World War 2. After four years, and at the end of
World War 2 in 1945, he volunteered for service with Mennonite
Central Committee (MCC), where he served for six years in England
and the Netherlands. In 1946 he was assigned to the British Zone of
Germany through MCC and CRALOG (Council of Relief Agencies Licensed
to Operate in Germany), working with all in need of food, clothing,
and emigration help, but mostly with refugees from Eastern Europe
and Russia.

Of great satisfaction to him was
initiating the feeding of about 100,000 children daily in North
Germany with food supplies sent by Mennonites in North America
through MCC. When he was born in the famine year of 1921, it had
been MCC food sent to Russia that saved his life 25 years
earlier.  His MCC field service ended with nearly three years
in South America, resettling refugees from Europe and Russia in
Paraguay and Uruguay. Among his greatest rewards was finding and
initiating the founding of a hospital and treatment center for
lepers at Km81 in Paraguay, together with the Mennonites in that
land. He returned to Canada in 1951 and in 1952 married Wilma
Regier of his home community in Laird, Saskatchewan.

Following his return from MCC
service, he studied at Bethel College, Kansas, for two years
graduating in 1953. He then earned an MA degree in history from
Wichita State University while also serving as pastor of the Zion
Mennonite Church in Elbing, Kansas (1951-1955). From 1955-1959 he
studied history and theology at the University of Chicago, earning
the Bachelor of Divinity and PhD degrees, while also serving as
Business Manager of Mennonite Biblical Seminary (MBS) on Woodlawn
Avenue. Two children, Mary and Jennifer, were born to the Dycks in
Chicago. A third daughter, Suzanne, was born  in Elkhart,
Indiana.

Since MBS in Chicago and Goshen
(IN) Biblical Seminary agreed to found a joint campus in Elkhart,
Indiana, it became CJ's responsibility to move the Chicago seminary
to Elkhart where the two schools formed the Associated Mennonite
Biblical Seminary (AMBS) in 1958. AMBS is now known as Anabaptist
Mennonite Biblical Seminary. He was then invited to join the new
faculty team as Professor of Historical Theology, a position he
held for 30 years until retiring in 1989. He had already begun his
work as Director of the Institute of Mennonite Studies, a research
agency, in 1958, a position he held for 21 years. This work led to
many conferences and some 50 publications, including some of his
own writings. Among the latter was his Introduction to Mennonite
History,which after two revisions since 1967, was still being used
as a textbook in many Mennonite high schools and colleges into the
21st century.

CJ was preceded in death by his
parents, John J. and Renate (Mathies) Dyck of Laird, Saskatchewan;
his sisters Eliese Quiring, Anna Neufeldt, Irma Balzer, and Helene
Funk, as well as brothers John R. and Peter J. Surviving him are
his wife of 61 years, Wilma of Normal; three daughters, Mary of
Normal, Jennifer (Suzie Lane) of Dunkirk, New York, and Suzanne
(Brad Kliewer) of Minneapolis, Minnesota; three granddaughters,
Claire Dyck of Normal, Aurora and Avery Kliewer of Minneapolis; and
sisters Clara Dyck and Renate (George Kroeker) of Winnipeg,
Manitoba, as well as many nieces and nephews.

He was involved in many Mennonite
church and local community committees, including Elkhart (IN) Urban
League, YMCA, General Conference Mennonite Church Board of Business
Administration as well as its Historical Committee, Executive
Committee of MCC, founding board of Oaklawn Psychiatric Center,
Elkhart, IN, Mennonite Historical Committees in the US, Canada,
Netherlands, Germany, American Society of Church History, Society
for Reformation Research. He served as Executive Secretary of
Mennonite World Conference (MWC) from 1961-1973.

A Festschrift,Anabaptism Revisited,
edited by Walter Klaassen, was published in Dr. Dyck's honor in
1992, which also contains a bibliography of his major writings. The
Oaklawn board awarded him a citation in 1970. Bethel College, KS,
awarded him the Distinguished Alumnus Award in 1976. He became a
member of the Mennonite Church through baptism in Saskatchewan in
1939 and was a member of the Mennonite Church of Normal,
Illinois.

Memorial gifts may be made to
Mennonite Central Committee, Akron, PA; Anabaptist Mennonite
Biblical Seminary, Elkhart, IN; or Mennonite World Conference,
Fresno, CA or Waterloo, ON.

To send flowers to the family or plant a tree in memory of Cornelius John "CJ" Dyck, please visit our floral store.

To send flowers to the family in memory of Cornelius Dyck, please visit our flower store.