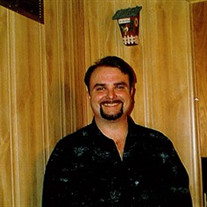 He is survived by his sons, Austin and Garrett Kingen, of Lacon;
his mother, Gwen Kingen, of Lacon, his brother, Troy (Shelly)
Kingen, of Peoria; and his sisters, Bambi Kingen and Kelly Kingen,
both of Lacon.

He was preceded in death by his father, Jack Kingen, and his
grandparents.

Craig worked at Caterpillar Inc., ITI, and Trumbull River
Services.  He was a loving son and father and will be greatly
missed.

Cremation rites have been accorded.  Services will be at
7:00 p.m. on Wednesday August 29, 2012 at the Lacon-Sparland United
Methodist Church in Lacon; the Reverend Casey Taylor will
officiate.  Visitation will be from 5:00 to 7:00 p.m. also on
Wednesday, also at the church.  Memorials may be made to the
Education Fund for Austin and Garrett Kingen c/o The First National
Bank of Lacon.  Lenz Memorial Home is charge of
arrangements.

To send flowers to the family or plant a tree in memory of Craig Kingen, please visit our floral store.

To send flowers to the family in memory of Craig Kingen, please visit our flower store.