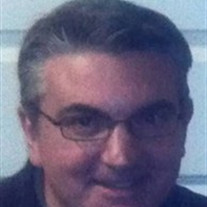 Normal-Daniel "Dan" M. Simpson, 44, of Normal, formerly of, Park
Ridge, IL passed away at 6:50 am on November, 12, 2012 at Advocate
BroMenn Regional Medical Center in Normal.

He is survived by his wife Deanna, a daughter, Danielle, a son,
Brendan Cooper, step-sons, Jeremy and Jacob all of Normal; his
mother, Rosemary of Park Ridge, IL; three sisters, Cindy(Tom)
Kutzki of Orland Park, IL Becky (David) Browe of Orland Park, IL
and Amy Loiacono of Park Ridge, IL ; a brother David Simpson of
Chicago , nieces, Allison, Abby, Tammy(Steve) Leve of
Elmhurst, IL and Jenny(Daniel) Ullery of Algonquin, IL and nephews,
Michael and Jason along with several other nieces and nephews; Also
surviving are his in-laws, Ron and Darlene Dudley of Joliet; IL a
brother-in-law,Paul (Debbie) Dudley of Plainfield, IL,
sister-in-law, Brenda(Al) Dizanni of Mokena, IL,  sister- in-
law, Bobbie (Joe ) Janarisits of Bloomingdale, IL, and a sister-
in- law, Anna (Tom) Wenezloft of Algonquin, Il.

He was preceded in death by a brother-in-law, Michael Loiacono
and a step sister Diane Blackwell.

Dan graduated from Maine South High School in 1986. He was
employed at KBL Design Center as the stores sales manager and
designer. He also Studied at the American Academy Of Art in
Chicago.

He was a member of First Assembly of God in Normal. Dan was also
a member of PADI (Professional Association of Diving Instructors)
in Chicago and was certified as a Master Scuba Diver.

Dan was a very good artist who often loved to draw and create
graphic designs and enjoyed playing golf. He also enjoyed reading
his Bible and growing in the knowledge and the ever faithful
presence of the Lord.

He was deeply loved by his family and will be sadly missed.

In lieu of flowers, memorial contributions may be made to the
family to set up an education fund for his children.

Online condolences may be sent to the family at
kiblerbradyruestman.com

To send flowers to the family or plant a tree in memory of Dan M. Simpson, please visit our floral store.

To send flowers to the family in memory of Dan Simpson, please visit our flower store.