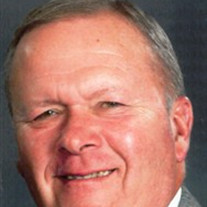 David W. Nuckels, 66, of
Bloomington, passed away Friday September 28, 2012 at 7:15 p.m. at
OSF St. Francis Medical Center, Peoria, IL. Funeral services will
be held at 2:00 p.m. on Tuesday October 2nd at Trinity
Lutheran Church, Bloomington with Rev Thomas Wirsing and Rev
Chirstopher Nitzel officiating.  Visitation will be one hour
before the service at the church. Visitation will also be from 4pm
until 8 pm on Monday October 1st at
Kibler-Brady-Ruestman Memorial Home in Bloomington.  Burial
will be in Evergreen Memorial Cemetery in Bloomington.  In
lieu of flowers, memorials may be made to Trinity Lutheran Church,
or Trinity Lutheran School in David's name.

David was born October 18, 1945 in Cape Gerardo, Missouri.
Son to Maynard and Mary (Brooks) Nuckels, he married Norma Martens
on August 16, 1969 Bloomington, IL at Trinity Lutheran Church, she
survives.  In addition to his wife Norma, David is survived by
one daughter, Brooke (Adam)   Richards of
Bloomington.

He is survived by one brother Steve (Marsha) Nuckels of
Carroll, Iowa.  Also surviving is one brother-in-law, Bill
(Joyce) Martens of Springfield, IL.  He is survived by one
granddaughter, Alexandria, and one grandson, Aaden.  Also
surviving are 6 nieces and nephews.  He was preceded in death
by his parents, in-laws, Delmar and Mildred Martens, and his
brother and sister in law Joel and Jeanne Martens.

David was a graduate of Illinois State University Normal, IL.
He worked for Caterpillar, retiring in 2011.  He was a member
and church elder at Trinity Lutheran Church, Bloomington.  He
cherished his backyard pond which he built. He also enjoyed his
work, producing voiceovers and voice productions in his business,
Heartland Voice-Overs.  David was a loving husband, father,
and grandfather.  Online condolences may be sent to the family
at Kibler-Brady-Ruestman Funeral home.

To send flowers to the family or plant a tree in memory of David W. Nuckels, please visit our floral store.

To send flowers to the family in memory of David Nuckels, please visit our flower store.