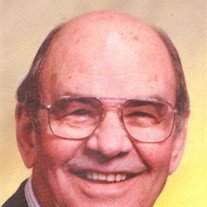 He was preceded in death by his parents, one sister, Rachel and
one infant brother, Quentin.

Dayton was a farmer in the Eureka area all his life.

A World War II veteran, he served in the Army in the South
Pacific and Korea as a Tech Corporal from 1943 to 1945.

Dayton was a member of Roanoke Mennonite Church where a memorial
service will be held at 11:00 a.m. on Wednesday, January 23, 2013.
Pastor Bryan Miller will officiate. Visitation will be held at
Roanoke Mennonite Church on Tuesday, January 22, 2013 from 5-8 p.m.
and one hour prior to services at the church on Wednesday. Private
family burial with military rites will be held at Olio Township
Cemetery in Eureka. Argo-Ruestman-Harris Funeral Home in Eureka is
assisting the family with arrangements.

In lieu of flowers, memorial contributions may be made to the
Eureka Apostolic Christian Home. Online condolences may be sent to
the family at www.ruestmanharrisfuneralhome.com.

To send flowers to the family or plant a tree in memory of Dayton Springer, please visit our floral store.

To send flowers to the family in memory of Dayton Springer, please visit our flower store.