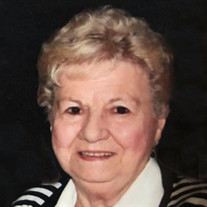 Delores Wagner
Peoria Heights - Delores C. Wagner, 87, of Peoria Heights, formerly of Roanoke, passed away on Monday, December 4, 2017, at her home surrounded by her family. Delores was born January 15, 1930, in Peoria, IL to George and Elsie Whitfield Sommers.
She married Victor Henry Wagner on January 19, 1947 in Peoria. They were married for 68 years prior to Victor's passing on Monday, January 26th, 2015.
She was the mother of eight children of which six survive: Rick Wagner, Peoria Heights; Daryl and Carol (Sarver) Wagner of Chillicothe; Jeff and Vicki (Wagner) Bilsland of Peoria; Robert and VaNessa (Wagner) Martin of Tremont; Roger and Damara (Wagner) Mohn of Germantown Hills; Nathan and Michelle (Hortsmann) Wagner of Peoria. She was a grandmother to fifteen grandchildren and fourteen great-grandchildren.
Besides Victor' passing, she was proceeded in death by her parents, two sisters and two children, Delene Wagner and David Wagner and one grandson, Justin Aeschleman
Delores went back to school after her children grew up earning an associate's degree in business administration from Illinois Central College. She then went to work in data entry for Nussbaum Transportation in Bloomington, IL. She was also heavily involved with the Civil Air Patrol during the 1960's and 1970's along with Victor.
She and Victor moved to Columbia, MO in the early 1980's where she worked in data entry for the accounting firm of Williams-Keepers Accounting, LLC, then later for Affiliated, Inc., a multi-state property management company as a property manager, as Victor worked as their maintenance engineer, working on several commercial properties in Columbia. They had a deep love for each other, their family and friends. They shared a great life together and eventually a small grocery business.
In her retirement, Delores owned and operated M & M Grocery in New Windsor, IL with Victor for several years before moving back home to the Peoria area. She always kept active, involved with her family and all sorts of activities.
Services will be at 11am Saturday, December 9, 2017. at Knapp Johnson Funeral Home in Roanoke, with visitation one hour prior to services. Burial will be in Secor Cemetery where she will be laid to her eternal rest alongside the love of her life, Victor.
Memorial contributions may be made to Unity Point Hospice or a charity of the donor's choice. Online condolences may be sent to the family at knappjohnsonharris.com


To send flowers to the family or plant a tree in memory of Delores C Wagner, please visit our floral store.

Please click here to view the video tribute
To send flowers to the family in memory of Delores Wagner, please visit our flower store.