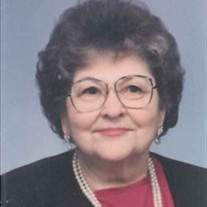 ROANOKE- Doris May Riley, 86, of Metamora, formerly
of Roanoke, passed away at 12:00 AM on January 18, at Snyder
Village in Metamora.

She was born in Eureka on September 6, 1927, a daughter of
Christian S. and Amelia Hartman Reeser.

She was preceded in death by a sister, Phyllis Reeser.

Doris graduated from Mennonite School of Nursing in Bloomington
in 1948. She worked for the Nichol Clinic in Eureka for several
years. She later worked in various capacities at the Eureka
Hospital for almost 30 years, retiring as an O/R nurse. She was a
lifelong member of the Roanoke United Methodist Church where she
was active in the women's club. She enjoyed doing crafts and most
of all spending as much time as she could with her grandchildren
and great-grandchildren.

Memorial Services will be at 11 AM on Saturday, February 1, 2014
at the Roanoke United Methodist Church. Visitation will be from 4-7
PM at Knapp-Johnson-Harris Funeral Home in Roanoke on Friday
January 31, 2014 and 1 hour prior to the service at church.
Cremation has been accorded and burial of ashes will be at a later
date.

Memorials can be directed to the Roanoke United Methodist Church
memorial fund.

Online condolences may be directed to her family at
www.knappjohnsonharrisfuneralhome.com

To send flowers to the family or plant a tree in memory of Doris Riley, please visit our floral store.

To send flowers to the family in memory of Doris Riley, please visit our flower store.