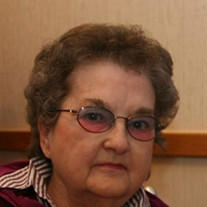 
She was preceded in death by her parents, husband, two sisters,
Luella(Zehr) Frobish and Alice Zehr; three brothers Leroy,
Floyd and George Zehr.


She graduated from Chenoa High School in 1954. She was a
life-long member of Meadows Mennonite Church. For many years, she
actively volunteered with her church, the elderly and sick in her
community, Meadows Mennonite Home, the Spare and Share Shop in
Gridley, and the Central Illinois Mennonite Relief Sale. In
addition to volunteering, she enjoyed celebrating the holidays with
her family, cooking,  especially baking, crocheting, making
ceramics, and spending time with her dogs.


She will be greatly missed, but we find comfort in knowing that
she is finally at peace. We are extremely grateful for the loving
care the staff of the Meadows Mennonite Home has provided to her
during the past six and a half years.


In lieu of flowers, memorial contributions may be made to the
Meadows Mennonite Home. Online condolences may be sent to the
family at www.ruestmanharrisfuneralhome.com.

To send flowers to the family or plant a tree in memory of Dorothy Bean, please visit our floral store.

To send flowers to the family in memory of Dorothy Bean, please visit our flower store.