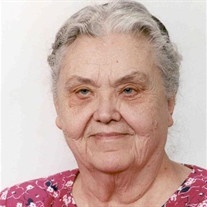 She was preceded in death by her parents, one daughter, Janice Bertschi; an infant brother, Robert Bertsch; and one brother, David Bertsch.

A homemaker, Dorothy was a loving wife, mother, and grandmother. She loved her family and enjoyed spending time with them. She especially loved it when the new grandchildren and great grandchildren came into the family. She liked to knit and sew and do other handy work. She enjoyed spending her winters in Zapata, Texas which she did for many years.

She was a member of the Roanoke Apostolic Christian Church where funeral services will be held at 1 pm on Sunday February 12th. Church ministers will officiate. Visitation will be held on Saturday from 4-7 pm at Knapp-Johnson-Harris Funeral Home in Roanoke and from 12-12:45 pm on Sunday at the church. Burial will be in the church cemetery.

Memorial contribution may be made to the Hospital Lumiere in Bonne Fin, Haiti. Online condolences may be sent to the family at knappjohnsonharris.com

To send flowers to the family or plant a tree in memory of Dorothy Bertschi, please visit our floral store.

To send flowers to the family in memory of Dorothy Bertschi, please visit our flower store.