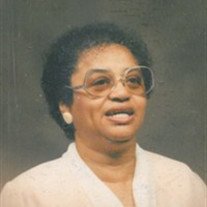 Funeral services will be at 11 am
on Friday, January 25, 2013 at Wayman AME Church in Bloomington
with the Rev. Charles Orr officiating. Visitation will be held from
10 to 11 am on Friday at her church. Burial will be in Evergreen
Cemetery. Memorials may be directed to The American Cancer Society
or Wayman AME Women's Missionary Society. Kibler-Brady-Ruestman
Memorial Home is assisting her family with arrangements.

Dorothy was born June 28,
1936 in Tiptonville, Tennessee a daughter of Charlie Garland and
Mabel Moody. She married George R. Gunter on June 4, 1988 in
Bloomington. He preceded her in death on May 15, 2001.

She was preceded in death by her
parents, two brothers and two sisters.

Dorothy was a long time member at
Wayman AME Church Women's Missionary Society and past president of
Church Women United. She belonged to the Order of the Eastern Star,
the National Association for the Advancement of Colored People, and
was an avid bowler for the Twin City Travelers Bowling League for
several years. Dorothy was dearly loved by all who knew her and
will be greatly missed.

Online condolences can be made to
the family at www.kiblerbradyruestman.com

To send flowers to the family or plant a tree in memory of Dorothy Gunter, please visit our floral store.

To send flowers to the family in memory of Dorothy Gunter, please visit our flower store.