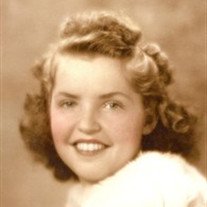 Dorothy was a member of First
Presbyterian Church, Normal where her
funeral services will be held on Friday, December 21, 2012 at
11:00
a.m. Rev. Larry Gaylord will officiate. Burial will be in East
Lawn
Memorial Gardens, Bloomington. Visitation will be from 9:00 a.m.
until
time of services on Friday at her church. Ruestman-Harris Funeral
Home,
El Paso is assisting her family with arrangements.

She was preceded in death by a son,
Rodney, grandson, Joseph Brines, two
sisters and two brothers.

She was a graduate of Mercy School
of Nursing and was employed by
Mennonite Hospital in Bloomington for many years. She also was
a
private and home health care nurse. She enjoyed playing bridge,
was a
member of the McLean County Home Extension and Red Hat
Society.


Memorial contributions may be directed to Meadows Mennonite
Retirement
Community or First Presbyterian Church, Normal. Online condolences
may be sent to her family and her memorial video may be viewed
at

To send flowers to the family or plant a tree in memory of Dorothy E. Koppenhoefer, please visit our floral store.

To send flowers to the family in memory of Dorothy Koppenhoefer, please visit our flower store.