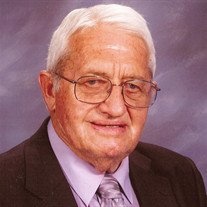 Roanoke - Earl L. Kennell, 86, of Roanoke, passed away to his heavenly home on December 4, 2019 at his residence. He was born on April 26, 1933 on the family farm in Roanoke to Arthur P. and Katie Horsch Kennell. He married Shirley M. Ulrich on March 15, 1957 at Linn Mennonite Church.

He was preceded in death by his parents, one son, Edward Earl Kennell; one son-in-law, Bill W. Bowald; and three brothers, Lyle, Delmar, and Dean Kennell.

As a third-generation farmer he was outstanding in his field and lived within a mile of his birthplace. Earl farmed all of his life in the Roanoke area. Earl served during the Korean War volunteering his services with the Mennonite Voluntary Services. When he was young, Earl loved his time at Linn Mennonite where he enjoyed competing on their softball team. He was a member of the Roanoke Mennonite Church and served as an usher for many years.

He was popular in the community and enjoyed going to the "farmers table" every morning at Doc's diner in Roanoke to analyze the markets and meet with his friends. He had a love of chess and checkers and his favorite game played was a chess match against Bobby Fischer. He competed yearly in many state of Illinois class B checkers competitions and won many tournaments he competed in.

Earl loved spending his winters in Sarasota, FL., bicycling and swimming in the Gulf. Most of all though, faith and family came first for Earl. He loved to go out for family dinners with his family and was known as their quiet stable rock. He will be greatly missed.


To send flowers to the family or plant a tree in memory of Earl L Kennell, please visit our floral store.

To send flowers to the family in memory of Earl Kennell, please visit our flower store.