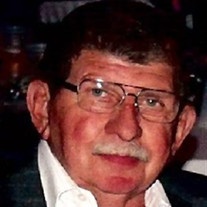 He was born on May 17, 1942 in Freeport, Illinois the son of the
late Bert and Estella (Horan) Allen and had attained the age of 70
years. He married Barbara Robenstein on June 4, 1961 in Secor,
Illinois and she survives.

Mr. Allen worked in a supervisory capacity for Caterpillar for
over 35 years retiring in 1994. He was an active member of Saint
John's Lutheran Church in Secor holding various offices through the
years. He was an avid traveler and was a member of the Winnebago
Itasca Travelers Club, Pontiac Caterpillar Camping Club, Illinois
Indians State Club, Winnie Poo Winnebago Club and the Family Motor
Coach Association. He was active in the Boy Scouts of America where
he had attained the Silver Beaver and Lamb Award, District Award
for Merit and he had undergone Wood Badge Training. Mr. Allen was
also a former scout master in Roanoke and El Paso. He was also a
member of the Bach Bay Gang who are a group of individuals that
volunteer their time to help maintain and upgrade a Boy Scout camp
in the boundary waters of Canada. He was a former safety instructor
for the Illinois Association of Snowmobile Clubs. He enjoyed the
outdoors and was a member of the Secor Sportsmans Club. Mr. Allen
was also a skilled woodworker and belonged to the Mesa Regal Wood
Carvers Club.

In addition to his wife, Barbara, he is survived by two sons,
Mark Allen of Secor, Illinois and Michael and his wife Theresa
Allen of Eau Claire, Wisconsin, a daughter, Karen Allen of Secor,
two grandsons, Ryan Helland and Travis Gregerson, a granddaughter,
Kasey Gregerson, three brothers, Russell Pifer of Florida, Bill
Allen of Rockford, Illinois and Fred Allen of Minonk, Illinois and
by several nieces and nephews.

In addition to his parents he was preceded in death by a
granddaughter, Brandi Allen.

Cremation rites have been accorded. A memorial service will be
conducted at 11:00 AM on Friday, November 2, 2012 at Saint John's
Lutheran Church in Secor, Illinois. Pastor Scott Adle will
officiate. Visitation will be conducted from 4 until 7:00 PM on
Thursday, November 1, 2012 at the Ruestman-Harris Funeral Home in
El Paso, Illinois. In lieu of flowers the family requests memorial
contributions in Mr. Allen's memory be made to Saint John's
Lutheran Church in Secor, Illinois or to the Boy Scouts of
America-Bach Bay Gang. Condolences may be left for the familyat
www.ruestmanharris.com

To send flowers to the family or plant a tree in memory of Edward E. Allen, please visit our floral store.

To send flowers to the family in memory of Edward Allen, please visit our flower store.