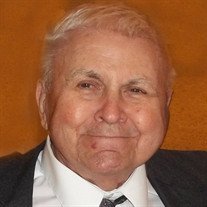 A funeral mass will be held at 10am Friday at St. Joseph Catholic Church, Roanoke, with Msgr
Charles Beebe celebrating the mass. Visitation will be from 5 to 7pm Thursday at Knapp-Johnson-Harris Funeral Home, Roanoke, where a prayer vigil will be held at 4:30pm. Additional visitation will be held from 9:30-10:00am prior to the services at the church on Friday. Interment will be in the Roanoke Township Cemetery, Roanoke. Memorials may be made to Roanoke Ambulance, St. Joseph Catholic Church or American Diabetes Association.

Eldon was born October 14, 1938, in Peoria, to Rudy and Leta Reents Schoon. He graduated from Benson High School.

Eldon had a strong work ethic and was a machinist by trade. He retired from Monarch Manufacturing in East Peoria in 1992. He was raised on a farm near Washburn where his love of farm machinery turned into an adult hobby of buying, collecting, and rebuilding toy farm equipment. He was the proud owner of over 2,000 toy farm tractors which he was only too happy to show off. His knowledge of toy farm tractors was encyclopedic. He loved spending time with his family and especially with his wife, Jan, exploring all the local restaurants. His was the epitome of a simple life and he lived it gracefully. He was loved and will be greatly missed.

Tributes and condolences may be made at knappjohnsonharris.com.

To send flowers to the family or plant a tree in memory of Eldon Lee Schoon, please visit our floral store.

To send flowers to the family in memory of Eldon Schoon, please visit our flower store.