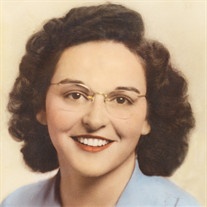 Ella Marie Manley
Benson- Ella Marie Manley, 87, of Benson, Illinois passed away at 9:45 a.m. on January 2, 2015 at Synder Village in Metamora, Illinois where she had been a resident.
She was born on March 14, 1927 in Wapella, Illinois a daughter of Patrick Henry and Ida Fern Keeney Murphy. She married James V. Manley on July 25, 1952 in Bloomington, Illinois. They enjoyed 61 years of marriage before he preceded her in death on March 25, 2013. Surviving are three daughters, Janet (Paul) Griego of Glendale, Arizona; Elaine (Tom) Harms, of Roanoke, Illinois; Laura (Tom) Knoblauch of Normal, Illinois; one son, Murray (Vickie) Manley of Benson, Illinois; one brother, Vincent (Iona) Murphy, Wapella, Illinois; eight grandchildren, Kelly Dodson, Bradley (Jennifer) Griego, Amy (Mat Dobie) Harms, Kristen (José La Santa) Knoblauch, Nicholas Knoblauch, Kimberly Knoblauch, Taylor (Ariel) Nieves, Noah (Robin) March and seven great-grandchildren, Ryan, Tyler, Taylor, Ella, Madison, Anthony and Noah.
She was preceded in death by her parents, three sisters and five brothers.
Ella Marie graduated from Wapella High School in 1945. A homemaker, Ella Marie had also worked at State Farm Insurance in Bloomington and as a waitress at Club 116 in Roanoke.
She was a member of St. John Catholic Church in Benson and a founding member of the Benson Ambulance Squad where she served as a volunteer EMT for many years.
A Funeral Mass will be held at St. John Catholic Church in Benson on Tuesday, January 6, 2015 at 11:00 a.m. Msgr. Charles Beebe will officiate. A rosary service will be held at 9:00 a.m. and visitation will be held from 9:30-11:00 a.m. before the service at the church. Burial will be in St. John Catholic Cemetery. Knapp-Johnson-Harris Funeral Home in Roanoke is in charge of arrangements.
Memorial contributions may be made to St. John Catholic Church, Benson Ambulance, or the Benson American Legion. Online condolences may be sent to the family at www.knappjohnsonharris.com


To send flowers to the family or plant a tree in memory of Ella Marie Manley, please visit our floral store.

Please click here to view the video tribute
To send flowers to the family in memory of Ella Manley, please visit our flower store.