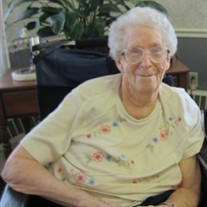 Bloomington- Elsie
M. Laesch, 94, of Bloomington passed away on June 7, 2013 at 7:17
pm at Heritage Health in Normal. Funeral services will be held at
10:30 am on Saturday, June 15, 2013 at Our Redeemer Lutheran Church
in Bloomington with Pastor Jonathan Manor officiating.
Visitation will be held from 9:30 am until time of the
services at the church on Saturday.

Interment will be at Park Hill
Cemetery in Bloomington. In lieu of flowers, memorials may be
directed to  the Peace Meal Program, the Brotherhood Tree, or
to the Salvation Army which were a few of Elsie's favorite
community charities that she supported. Kibler-Brady-Ruestman
Memorial Home is handling arrangements for the family.

Elsie was born on February 16, 1919
in Danvers, Illinois a daughter of Otto and Bertha (Ranft) Buth.
She attended schools in the Danvers and Stanford area and graduated
from Stanford High School in 1936. Elsie married Herbert H. Laesch
on February 8, 1953 in Danvers. He preceded her in death on August
30, 2002.

In addition to her husband Herbert,
Elsie was preceded in death by her parents.

Elsie and Herbert farmed in the
Anchor/Saybrook area until their retirement in 1983 when they moved
to the east side of Bloomington.

She spent almost her entire married
life being the "eyes" for Herbert, who lost his eye sight in a
farming accident shortly after they were married. The two of them
traveled worldwide as Elsie described the world he could no longer
see. They made quite a team.

Online condolences and memories of
Elsie may be sent to the family at kiblerbradyruestman.com.

To send flowers to the family or plant a tree in memory of Elsie M. Laesch, please visit our floral store.

To send flowers to the family in memory of Elsie Laesch, please visit our flower store.