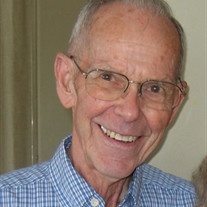 Funeral services will be held,
Saturday, June 29, 2013 at 11a.m. at St John's Lutheran Church in
Bloomington with Pastor Brian W. Goke and Pastor Christine McNeal
officiating.  Visitation will be held Friday, June 28, 2013
from 5-7 p.m. at Kibler-Brady-Ruestman Memorial Home in
Bloomington..

Interment will be at Park Hill
Cemetery in Bloomington. Full Military Rites will be conducted by
the Bloomington Normal American Legion Honor Guard.
Memorials may be made to Children's Hospital of Illinois in Peoria
or St. John's Lutheran Church in Bloomington.

His parents, 3 brothers, 1 sister
and one great grandchild, Calvin Olsen preceded him in death.

Ernie was a 1941 graduate of
NCHS.  He was proud to serve as an infantryman in the U.S.
Army, European Theater in World War II in the 3rd Army,
Fifth Division, 10th regiment.  He was awarded the
Combat Infantry Badge and Bronze Star.

His first job was a Pantagraph
carrier, then he was a car hop at the original Steak N Shake.
Before his retirement he was a floor mechanic and tile setter.

He was a member of St. John's
Lutheran Church in Bloomington and American Legion, Carl S. Martin
Post 635.  He sang in the church choir and the Sound of
Illinois Chorus.  He enjoyed woodworking, carving and
collecting railroad memorabilia.

To send flowers to the family or plant a tree in memory of Ernest M. "Ernie" Swartz, please visit our floral store.

To send flowers to the family in memory of Ernest Swartz, please visit our flower store.