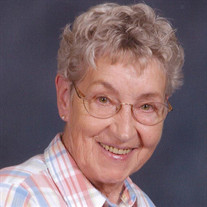 Roanoke - Esther Mae Funk, 85, of Roanoke, IL passed away on Saturday, July 15 at her residence.
She was born on November 29, 1931 in Metamora, a daughter of Kenneth and Doris Armstrong Wilson. She married Norman James Funk on April 16, 1949 in Metamora. He passed away on August 15, 2009.
Surviving are one son, Andrew (Tamela) Funk of East Peoria; two daughters, Debbie (Dave) Schrader of Roanoke and Amy (Dennis) Funk O'Rourke of Eureka. Also surviving is one sister, Karen (Curt) Ballard of East Peoria; one sister-in-law Eunice Schupbach of Bloomington. She is also survived by four grandchildren; Staci (Jim) Fairchild of Roanoke; Lindsay (Jeremy) Ziegenhorn of Louisville; Joshua Chiotti and Dani Chiotti of Eureka; and three step-grandchildren, Riley and Madison O'Rourke of Eureka, and Kaelyn (Cody) Roth of California; four great-grandchildren: Hayley and Jimmy Fairchild; Zoe & Ava Ziegenhorn.; and one nephew, Dennis (Betsy) Tipsword of Metamora.
Esther was preceded in death by two sons, Norman Funk, Jr. and Daniel Funk; and one brother.
After staying home to raise her children, Esther began working as a photographer and writer for the Roanoke Review. She then worked at the Illinois FFA Center in Roanoke for fourteen years. She received the Honorary State FFA Degree, the Honorary American FFA Degree and a Distinguished Service Award to recognize her significant contributions to Illinois Agricultural Education and the FFA which were presented at the 1995 National FFA convention. She also received the Award of Merit from the Illinois Association of Vocational Agriculture Teachers.
Esther was a devoted member of the Roanoke Methodist Church for over 60 years where she taught Sunday School and worked with the youth. She was a lifelong member of the United Methodist Women and held the secretarial position for many years.
Esther enjoyed reading, gardening and playing her computer games. But most of all, she enjoyed being with her family. She will be greatly missed by her family and friends.
Funeral services will be held at 10:00 a.m. on Thursday, July 20 at the Roanoke Methodist Church, Pastor Charlie Graul will officiate. Visitation will be on Wednesday at Knapp-Johnson Harris Funeral Home in Roanoke from 4-7 pm and one hour before the service at the church. Burial will be in Roanoke Township Cemetery.
Memorials may be made to the Roanoke United Methodist Church. Online condolences may be sent to the family at www.knappjohnsonharris.com.

To send flowers to the family or plant a tree in memory of Esther Mae Funk, please visit our floral store.

Please click here to view the video tribute
To send flowers to the family in memory of Esther Funk, please visit our flower store.