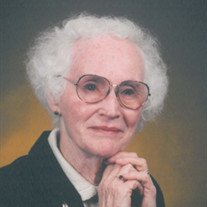 Memorials may be made to
Westminster Village Foundation or an organization of the donor's
choice.  Kibler-Brady-Ruestman Memorial Home in Bloomington is
assisting the family with arrangements.

She was born on February 7, 1919 in
Danville, IL. The daughter of an Illinois coal miner, John Jennings
Cox and Mary Elizabeth Kidd Cox, and the eldest of five
children.

Eva and her brothers and sisters
grew up near Oakwood, IL, close to her grandparents and extended
family.  She graduated from Oakwood Community High School
where she played baseball and basketball.

She met the love of her life, Roy,
on a blind date, and they soon wed and established their home in
the area.  Her parents moved from the Danville area to Canton,
IL where the coal mining industry was opening, and Eva and Roy and
their first child soon moved to Canton where Roy was employed by
United Electric Coal Company.  Eva was a busy homemaker and
mother for her sons and husband and made time to be a dedicated
daughter and sister to her father and younger brothers and
sisters.

She was a faithful fan of her sons
in their sports activities, a regular attender of their games, and
always held an open house where all their friends could
gather.  She and Roy were devoted to their sons and ensured
that they had college educations.

They enjoyed Roy's membership in
the Elks Club of Canton and they were always present and willing
workers at the social gatherings and "fish fry's".  She was a
faithful member of her church.

Eva enjoyed gardening and the
outdoors and was a life long walking enthusiast.  She was
a  regular patron of the YMCA fitness classes during her years
in Canton.  She was a member of the Order of Eastern
Star.  She was an avid St. Louis Cardinals fan and enjoyed
listening to and watching the games.  She was accomplished in
the needlework crafts, loved to read, and had a precious collection
of Hummel figurines and annual plates.

After the boys left home she worked
for 20 years in food services  for the Canton school
district.

She cared about her brothers and
sisters and faithfully wrote letters and kept in touch with her
family as they moved about the country.  She enjoyed her grand
children and was generous with her attention and
affection.

During her years in Bloomington at
Westminster Village, Eva made many friends with the residents and
staff, and enjoyed her home there.  Her family is appreciative
of the warm and caring atmosphere the Westminster Village family
provided.  The nurses and staff in Assisted Living and Martin
Health Center were attentive and kind and gentle friends.

Eva made friends easily and where
ever she was, she always had a wonderful smile for everyone.
She was a kind and loving wife, mother, grand mother, friend and a
lady - full of grace.

To send flowers to the family or plant a tree in memory of Eva G. Williams, please visit our floral store.

To send flowers to the family in memory of Eva Williams, please visit our flower store.