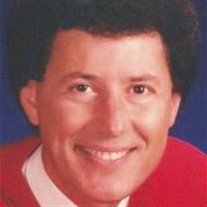 Frank graduated from Roanoke-Benson high school with honors and served as the President of his senior class. He earned his Bachelor's and Master's degrees from Bradley University, where he also taught and graduated with distinction.

Frank was one of twelve National Fellows earning a full scholarship towards his doctoral work in Communications from the University of Southern California. While at USC Frank coached the Trojans' "General Electric College Bowl Quiz Team" to an undefeated National Title televised on NBC-TV in New York City. Two years later he coached Bradley's College Bowl Team to a perfect record and another National Championship also televised on NBC-TV in New York City. Frank is the only person to have coached two Universities to Nat'l Championships.

Frank also served as vice president of The Dirksen Congressional Leadership Center in Pekin, IL.
Frank then moved to WEEK-TV where his Sunday evening Sports program became the area's top rated sports show. Still in his 20's Frank was offered the coveted TV play-by-play position for the Boston Celtics, but declined due to his mother's declining health and subsequent passing.

In just a few years Frank was named President and CEO of WEEK-TV, where he brought Ronald and Nancy Reagan and George H.W. Bush and Barbara Bush to the station to prepare and give their 1980 Election Eve address to America. When Reagan finished his address to the nation, Frank received a private TV feed in his office, showing Reagan was far ahead of President Jimmy Carter. Frank privately asked Reagan to his office to show him the results, where he said to the 1980 Republican candidate, "Congratulations, Mr. President Elect!" Mr. Reagan shook hands with Frank and said, "Well, you're the first person who ever called me that!"
Frank also served as Executive Vice President of Eagle Broadcasting Co. in New York City and was named the anchor television play-by-play broadcaster for the IL State High School Basketball Tourney on WGN TV and the State Network. He served for eleven top-rated years while still leading WEEK-TV and calling Bradley Basketball on TV. Frank broadcast more Bradley basketball games on TV than anyone in history, which encompasses broadcasts on WEEK, WGN, ESPN & COMCAST TV.

Frank covered two of the most famous basketball games in history. First, he called the longest game in college basketball of all time, when he broadcast the seven-overtime battle in 1981 between Bradley and Cincinnati at Robertson Fieldhouse. Frank also called the play-by-play for what is named by many fans and veteran high school coaches and officials as "The greatest game ever in the IHSA Basketball Tourney," the 1989 three-overtime classic between Peoria Central and East St. Louis Lincoln.

Ready for another challenge, Frank continued broadcasting college basketball on TV and accepted the offer to become President and CEO of The Proctor Healthcare Foundation, where he directed the massive development project and acquisition of adjacent homes thus far growing the hospital for tremendous expansion. Frank also secured the naming gift for the Ameel G. Rashid Center for Addiction Recovery at Proctor Hospital in Peoria.

A timeless man who inspired us, Frank participated in numerous public service work throughout his life. He served on the Board of Directors of St. Jude and was co-host of the annual telethons with Danny Thomas, Marlo Thomas, Phil Donahue and Jim Maloof.

Frank was also elected to the Board of Directors of the State of Illinois American Heart Association, and was named by Gov. Jim Edgar, as the sole public member of the IL Optometric Board, where he served twelve years, longer than any public member.

Frank served on the Board of Directors of Family House, Junior Achievement, The Hult Center for Health Education, where he obtained the naming gift; The Peoria Civic Opera Co., Bradley University National Alumni Association, and was one of the founding members of the Bradley Chiefs Club along with his wife, Lisa's father, Mort Cantor.

Frank was honored nationally when he was named to the "Who's Who in America" for the first time in 1998 and several years since. He was also given the high honor of inclusion in Outstanding Young Men in America; Community Leaders of the World; International Who's Who in Community Service; International Who's Who of Intellectuals; and Outstanding Leaders of the Bicentennial Era.

With the exceptional and blessed life Frank lived, his most treasured moments were clear and those which he spend with his son RJ, whereas, Frank said of him, "RJ, YOU are my greatest achievement!"

A celebration of life service and time of sharing for Frank will be held at 7:00 pm on Wednesday, March 22, 2017 at Knapp-Johnson-Harris Funeral Home in Roanoke following the visitation which will be held from 4-7 pm.

Funeral Mass will be held at St. Joseph's Catholic Church in Roanoke on Thursday, March 23, 2017 at 11:00 am. Father Don Henderson will officiate. Visitation will be held from 10 to 11 a.m. prior to the service at the church. Burial will be in Roanoke Township Cemetery.

To send flowers to the family or plant a tree in memory of Frank J. Bussone, please visit our floral store.

Please click here to view the video tribute
To send flowers to the family in memory of Frank Bussone, please visit our flower store.