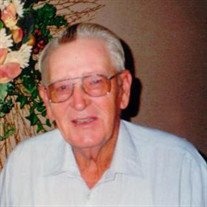 Frank served in the U.S. Army during the Korean War. He was a farmer his whole life and enjoyed farming. He was a member of the Roanoke Legion Post # 463.

He was also a member of the Roanoke Mennonite church where funeral services will be held on Wednesday December 23, 2015 at 2 PM. Visitation will be from 4-7 pm on Tuesday December 22, 2015 at Knapp-Johnson-Harris Funeral Home in Roanoke. Burial will be in Roanoke Twp. Cemetery.

Memorials may be given to The Roanoke Mennonite Church or Apostolic Christian Home of Roanoke. Online condolences may be directed to his family at www.knappjohnsonharris.com.

To send flowers to the family or plant a tree in memory of Frank E. Schirer, please visit our floral store.

To send flowers to the family in memory of Frank Schirer, please visit our flower store.