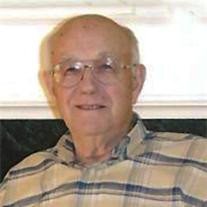 Eureka - Frank Wackerle, 94, of Eureka, formerly of Bay City,
Michigan, passed away at 4:30 am on Wednesday, July 24, 2013 at the
Apostolic Christian Home of Eureka.

He was preceded in death by his parents; 1 brother, Robert
Wackerle; two sisters, Elaine Bahler, Helen Holeman; and one step
grandson.

Frank was a member of the Carpenter's Union Local #706 for
almost 60 years.  He worked as a construction superintendent
for the Englehart Construction Company for over 40 years, building
the Friendship Shell, schools, churches, and many landmarks in the
tri-city area.

He was a member of the Apostolic Christian Church.

Memorial contributions may be made to the Apostolic Christian
Home of Eureka or to a charity of the donor's choice.  Online
condolences may be sent to the family at www.ruestmanharrisfuneralhome.com

To send flowers to the family or plant a tree in memory of Frank Wackerle, please visit our floral store.

To send flowers to the family in memory of Frank Wackerle, please visit our flower store.