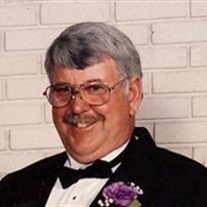 Gary Edward Anderson, 73, of Lacon passed away peacefully
on Friday, March 7, 2014 at 2:07a.m at his residence. Gary was born
June 1, 1940 in rural Lacon, Illinois to Dorothy (Way) and John E.
Anderson. He married Jill (Bennington) Haire on May 26, 1979 in
Princeton, Illinois. She survives. Between them they shared 6
children and 8 grandchildren. They are: Patricia Heath of Lacon and
her children Abby and Will; Michele Anderson of Peoria; Jennifer
(Scott) Johnston of East Peoria and their son Nate; David (Sue)
Anderson of Streator and their son Brandon; Jackie (Austin) Martin
of Lacon and their children Taylor and Mitch; and Joey (Kristy)
Haire of Rincon, GA. and their children Luke and Lillie. Also
surviving are two brothers, Donald (Charlotte) Anderson of Dacula,
GA, and Carl (Kathy) Anderson of Brimfield. He was preceded in
death by his parents and one sister, Sally Holocker.

Gary loved the game of softball, and never said no to a day of
fishing with a buddy or family member!

Cremation rites have been accorded, and a graveside service will
be held on Tuesday, March 11, 2014 at 11:30 a.m. at the Lacon
Cemetery. A Remembrance lunch will follow at the American Legion in
Lacon.


Memorials may be made to the Lacon Sparland Fire
Department, the Lacon Ambulance Service, or Methodist Hospice
Services. Online condolences can be left at
lenzmemorialhome.com

To send flowers to the family or plant a tree in memory of Gary Anderson, please visit our floral store.

To send flowers to the family in memory of Gary Anderson, please visit our flower store.