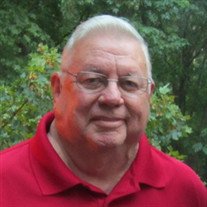 Bloomington: Gaylord L. Larson, 73, of Bloomington passed away
Sunday (December 23, 2012) at 11:25 a.m. at his residence in
Bloomington.  His funeral will be held at 2 p.m. Friday
(December 28, 2012) at Kibler-Brady-Ruestman Memorial Home,
Bloomington with Pastor Kurt Flora officiating.
Visitation will be held Thursday from 5 until 8 p.m. at the funeral
home.  Interment will be at Park Hill Cemetery,
Bloomington.  Memorials may be made to the Community Cancer
Center, Normal, IL or the American Cancer Society.

He was preceded in death by his wives Sharon and Betty and one
stepson Kevin McGuire.

Gaylord worked for and retired from the McLean County Building and
Zoning Department, as the assistant Director of the
Department.  He was a member of the Bloomington Eagles Club
and the Bloomington Moose Lodge.  He camped for many years at
the Hickory Hills Campground in El Paso with many of his good
friends.  He also enjoyed his hobby of woodworking.  He
was a loving husband, father, neighbor and friend.

Online condolences can be made to the family at
kiblerbradyruestman.com

To send flowers to the family or plant a tree in memory of Gaylord L. Larson, please visit our floral store.

To send flowers to the family in memory of Gaylord Larson, please visit our flower store.